VIDEO: MODERNIZED! What would Patrick Henry say if He were alive today? Jan 3rd, 2021 Click! - Back Up Video!

The Knights Oath From, "Kingdom Of Heaven!" 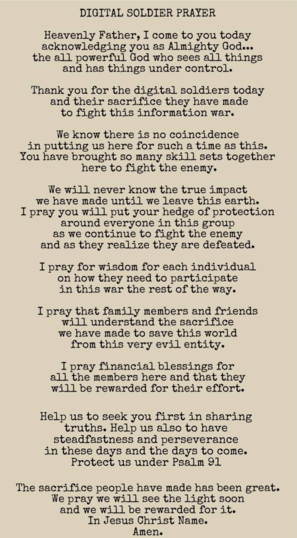 Psalms 91 The Lord Is My Fortress!

1. Live under the protection of God Most High and stay in the shadow of God All-Powerful.

2. Then you will say to the Lord , “You are my fortress, my place of safety; you are my God, and I trust you.”

3. The Lord will keep you safe from secret traps and deadly diseases.

4. He will spread his wings over you and keep you secure. His faithfulness is like a shield or a city wall.

5. You won't need to worry about dangers at night or arrows during the day.

6. And you won't fear diseases that strike in the dark or sudden disaster at noon.

7. You will not be harmed, though thousands fall all around you.

8. And with your own eyes you will see the punishment of the wicked.

9. The Lord Most High is your fortress. Run to him for safety,

10. And no terrible disasters will strike you or your home.

11. God will command his angels to protect you wherever you go.

12. They will carry you in their arms, and you won't hurt your feet on the stones.

13. You will overpower the strongest lions and the most deadly snakes.

14. The Lord says, “If you love me and truly know who I am, I will rescue you and keep you safe.

15. When you are in trouble, call out to me. I will answer and be there to protect and honor you.

16. You will live a long life and see my saving power.”

This ancient prayer to St. Joseph has “never been known to fail.”
WHOEVER SHALL PRAY THIS PRAYER, SHALL NEVER BE OVERPOWERED IN BATTLE!

Here is the prayer;
Oh, St Joseph, whose protection is so great, so strong,
so prompt before the throne of God,
I place in you all my interest and desires.
Oh, St Joseph, do assist me by your powerful intercession,
and obtain for me from your divine Son
all spiritual blessings, through Jesus Christ, our Lord.
So that, having engaged here below your heavenly power,
I may offer my thanksgiving and homage to the most loving of Fathers.

Oh, St Joseph, I never weary contemplating you,
and Jesus asleep in your arms;
I dare not approach while he reposes near your heart.
Press Him in my name and kiss His fine head for me
and ask Him to return the Kiss when I draw my dying breath.
St Joseph, patron of departing souls - Pray for me.

Say for nine mornings for anything you may desire. It has never been known to fail, so be sure you really want what you ask for.

This prayer was found in the fiftieth year of Our Lord and Savior Jesus Christ. In 1505 it was sent from the Pope to Emperor Charles when he was going into battle. Whoever shall read this prayer or hear it or keep it about themselves, shall never die a sudden death, or be drowned, nor shall poison take effect on them; neither shall they fall into the hands of the enemy, or shall be burned in any fire or shall be overpowered in battle.

GEORGE WASHINGTON'S - ADDRESS TO THE CONTINENTAL ARMY BEFORE THE BATTLE OF LONG ISLAND - TUESDAY, AUGUST 27, 1776
The fate of unborn millions will now depend, under God, on the courage and conduct of this army. Our cruel and unrelenting enemy leaves us only the choice of brave resistance, or the most abject submission. We have, therefore, to resolve to conquer or die."
EDITORIAL NOTES
When Washington delivered this address, his soldiers could look out into New York Harbor and see the largest British expeditionary force in that nation's history until the First World War.  With the United States having recently declared formal independence, the stakes for the Continental Army soldiers could hardly have been higher.
https://www.mountvernon.org/library/digitalhistory/quotes/article/the-time-is-now-near-at-hand-which-must-probably-determine-whether-americans-are-to-be-freemen-or-slaves-whether-they-are-to-have-any-property-they-can-call-their-own-whether-their-houses-and-farms-are-to-be-pillaged-and-destroyed-and-themselves-consigned/

The American people will now arrest all the traitors who are complicit in stealing the election. Posted on December 12, 2020 by State of the Nation

We the American people don’t care what the SCOTUS or anyone else says.  We won the election and Donald J. Trump is our President for at least the coming four years.  We are more than 90 million Americans who chose Donald J Trump as our president, more than double as much as those misled liberals who voted for the criminal Chinese agent Joe Biden.  Of the more than 90 million Trump supporters, many are armed and know how to use guns; many millions are veterans who are armed and have military training.  We are the President’s constitutional militia and together with the President, the police and the military, we will NEVER, EVER allow the election to be stolen from us. We will all together defend our nation against enemies, foreign and domestic.  The SCOTUS has shown its face, and it is the face of a traitor, a domestic enemy, a corrupt agent of a foreign enemy. They are enemy combatants and what do we do with enemy combatants!  They made a huge mistake and are basically already gone. Where it concerns all of them, who committed treason against our Republic, it is not only the right but the duty of every patriot to make a citizen’s arrest of these despicable traitors.  We, the American people, who voted for President Trump, together with the President’s administration, the police and the military represent an overwhelmingly powerful majority and the traitors are few, maybe not much more than 10,000 individuals at the top level or even less.  We have the numbers, we have the power, we have the weapons. It is an easy task for us to arrest all the traitors, dead or alive, and seize all the corporations who are complicit in this coup against the American Republic, and against us, the American people.  We are declaring all these traitors, who own and run Google, Facebook, Twitter, Amazon, CNN, ABC, MSNBC, Fox, Apple, Microsoft, New York Times, Washington Post as well as Democrat and Republican politicians, governors, mayors, congressmen, etc. who are complicit in this treason against our Republic, under citizen’s arrest and order them to give themselves in to nearest police station within 24 hours. If not, they will be hunted down and captured, dead or alive.  Bill Gates must be immediately arrested and his foundation, as well as Rockefeller Foundation, Ford Foundation and others, who are complicit in the COVID-19 hoax, must be seized post-haste.  All Level 4 biolabs must be closed.  It should be VERY CLEAR TO THE ELECTORS THAT IF THEY ELECT THE CRIMINAL JOE BIDEN ON MONDAY, DEC. 14th, AGAINST THE WILL OF THE AMERICAN PEOPLE, THEY ARE BASICALLY RESPONSIBLE FOR THIS COUP.  The American people will arrest them as traitors and save the Republic.  https://stateofthenation.co/?p=41268

And how we burned in the camps later, thinking: What would things have been like if every Security operative, when he went out at night to make an arrest, had been uncertain whether he would return alive and had to say good-bye to his family?
Or if, during periods of mass arrests, as for example in Leningrad, when they arrested a quarter of the entire city, people had not simply sat there in their lairs, paling with terror at every bang of the downstairs door and at every step on the staircase, but had understood they had nothing left to lose and had boldly set up in the downstairs hall an ambush of half a dozen people with axes, hammers, pokers, or whatever else was at hand?... The Organs would very quickly have suffered a shortage of officers and transport and, notwithstanding all of Stalin's thirst, the cursed machine would have ground to a halt! If...if...We didn't love freedom enough. And even more – we had no awareness of the real situation.... We purely and simply deserved everything that happened afterward.”  ― Aleksandr I. Solzhenitsyn , The Gulag Archipelago 1918–1956  -  https://www.goodreads.com/quotes/34738-and-how-we-burned-in-the-camps-later-thinking-what  Modern Day Version  -  Click here!  https://tinyurl.com/mvjxzdah

Patrick Henry's Give Me Liberty or Give Me Death speech, delivered at Richmond, Virginia - March 23, 1775.

Give Me Liberty or Give Me Death - Patrick Henry 1775 (emersonkent.com)
https://www.emersonkent.com/speeches/give_me_liberty_or_give_me_death.htm

VIDEO: MODERNIZED! What would Patrick Henry say if He were alive today? Jan 3rd, 2021.
Watch "Patrick Henry -- Give Me Liberty or Give Me Death modernized" on YouTube  https://youtu.be/o6wikc-JYew

Watch "The Chaplet of Divine Mercy in Song (complete)" on YouTube
https://youtu.be/p5TGfisOKMM

Watch "THE CHAPLET OF DIVINE MERCY IN SONG" on YouTube
https://youtu.be/tSVvBQtSqFM

The Rosary with Scripture: Luminous Mysteries  - Mike And Kate
https://youtu.be/ENYUu64ex-E

This ancient prayer to St. Joseph has “never been known to fail.”
WHOEVER SHALL PRAY THIS PRAYER, SHALL NEVER BE OVERPOWERED IN BATTLE! Click Here!